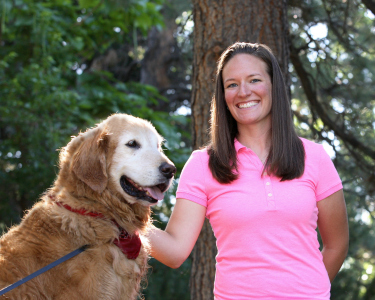 Bethani Puzo is a passionate 27-year-old student who is pursuing her master’s degree in Landscape Architecture at Colorado State University. In 2013, Bethani was diagnosed with osteonecrosis of her femur; the bone in her leg was dying, unexplainably. This diagnosis brought Bethani to the Colorado Limb Consultants where she underwent a core decompression with stem cells under the surgical care of Dr. Cynthia Kelly.

Though there are many unknowns concerning Bethani’s condition, this experience has made some aspects in Bethani’s life clearer, particularly in the area of education. Before her diagnosis, Bethani had been toying with the idea of going back to school to pursue her passion for gardening and the outdoors.  The severity  of her diagnosis made her realize that the time was now to live life to her fullest – and that meant going back to school for her master’s degree. The Limb Preservation Foundation has been able to help Bethani with her studies by providing her with the Extremity Scholarship Award for the 2014-2015 school year.

Bethani’s love for the outdoors extends beyond her studies and encompasses just about any activity that gets her outside: running, hiking, swimming, even triathlons!  Though she is not as active as she once was, she looks forward to getting back to the activities she loves by continuing to push through the struggle and to smile, even when it hurts!

Duffy is an extremely energetic, playful ten-year-old Golden Retriever who was diagnosed with osteosarcoma of his lower lumbar spine in January of 2014. Due to the location of Duffy’s cancer, it was important that measures be taken swiftly and carefully. Duffy went through three rounds of non-invasive radiation and four rounds of chemotherapy. Amazingly, he had little-to-no side effects to either treatments, but instead was his strong, energetic and enthusiastic self! Duffy is described by his mother as the “happiest mountain dog you’ll ever meet” and, boy, is that apparent when you meet him! He loves going on his morning walk to visit the concierge at a Cherry Creek hotel to get his daily doggie biscuit. He also enjoys swimming, chasing cats and “playing soccer.”