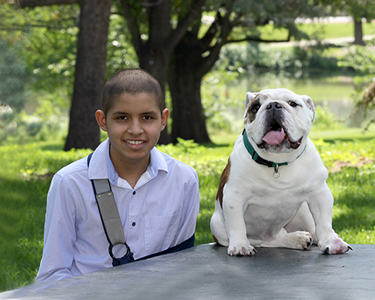 Axel Pineda is a sweet, soft spoken young man who just turned 14 years old. In June of 2014, Axel was diagnosed with high grade osteosarcoma in his left arm and his care was assumed by Dr. Cythia Kelly and Dr. James Ball of the Denver Clinic for Extremities at Risk.  He began pre-operative chemotherapy under Dr. Ball’s care and shortly thereafter underwent surgery with Dr. Kelly to remove the tumor and have the bone replaced with allograft (donor bone).

Axel’s journey with cancer has only recently begun, and that can weigh heavily on him. The chemotherapy is very difficult, and learning to reuse his arm has been a challenge, too. But, Axel focuses on life outside of the disease, stressing the importance of “remembering the way you used to live before you were diagnosed.”  When he has breaks from chemotherapy treatments, Axel enjoys spending time with friends, playing soccer and watching his favorite movie – The Breakfast Club (the “Jock” is his favorite character).

The Limb Preservation Foundation has supported Axel and his family with the financial burdens of his treatment through the Patient Assistance Fund, allowing the Pineda family to focus on their son’s treatment.

Frankie “Two Toes” is 10 pounds of cute in a 5-pound bag! This petite English Bulldog was diagnosed with a soft cell tissue sarcoma two years ago. Frankie earned his nickname of “Two Toes” after three of the toes of his front left paw were amputated during surgery to remove his tumor. Frankie continues to take a low dose of chemotherapy and seems to be feeling great. He still has a voracious appetite, never turning down his favorite food, steak! Frankie loves running, jumping, “swimming” in his kiddie pool, and skateboarding (yes, skateboarding)! This little guy doesn’t show any signs of slowing down; in fact, Frankie just got a bike trailer so he can hit the road with his dad on those beautiful Colorado rides!