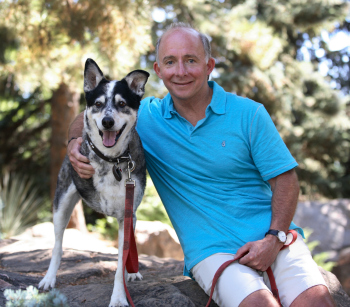 Maury Brochstein is an extremely kind man whose joy for life seems to be contagious! In December of 2012 Maury severely fractured his tibia in a skiing accident and had to undergo emergency surgery. Before going under, Maury recalls his surgeon, Dr. Wilkins telling him, “Maury, I promise you will have your leg.” Thankfully, his leg was saved, but Maury’s path to recovery was far from over. Dr. Conrad Tirre and Dr. David Hahn we’re brought on to Maury’s case to help battle a persistent, life- and limb-threatening infection. While he faced infections and complications with healing along the way, Maury maintained a positive and hopeful attitude, which he largely attributes to his battle with testicular cancer 27 years ago which put things in perspective. Maury also found great support in his loving wife, Susan, who nursed him back to health after his injury.

Prior to his accident, Maury was an active individual and enjoyed cycling, hiking and skiing. While he jokes that his “downhill skiing days are over”, he looks forward to getting back on his bicycle and spending more time outdoors.  After 28 years living and working in Texas, Maury and his wife, Susan, fulfilled their longtime dream of moving to Aspen in order to spend more time in the great outdoors of Colorado. Maury believes he has a great deal to be thankful for: his wife, his life and his health!  He encourages anyone in a similar position to stay positive, trust your doctor and find a great physical therapist to get you back up and moving!

The Limb Preservation Foundation has supported Maury in his recovery through the funding of research in the area of limb-preservation.

Berkley, a very handsome mixed-breed Shepherd, was diagnosed with osteosarcoma in May of 2012 after an injury to his paw. Berkley’s parents made the decision to amputate and begin chemotherapy. Even with Berkley’s veterinarian mother, it was a difficult decision to make. But, quickly, this family learned that Berkley was very much the same genuine, caring soul he was before his amputation. He made a complete recovery, enjoying activities such as swimming, running and jumping! In fact, Berkley’s success has been so remarkable, he has been featured by CSU Flint Animal Cancer Center in various promotions to educate on canine amputation and show how great dogs can do with one less limb! Not only did Berkley recover from his treatment with flying colors, he now shares his story to support other pups. What a guy!