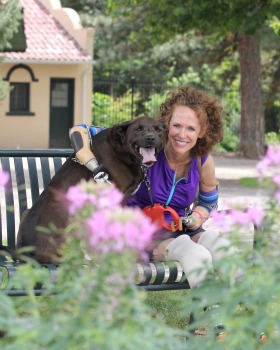 There hardly seem words to describe Christine Lentz, the battle she has been through, or the way in which she shines. In December of 2013, healthy, 47-year-old Christine went into septic shock after she developed an infection from surgery. Her situation quickly became critical, as doctors at Sky Ridge Medical Center fought to save Christine’s life. It quickly became obvious to her doctors and family that to save her life, all four limbs would need to be amputated. Her family made the decision to transfer her care to the skilled team of limb-preservation specialists at the Denver Clinic at Presbyterian/St. Luke’s Medical Center for the next stage in her battle. 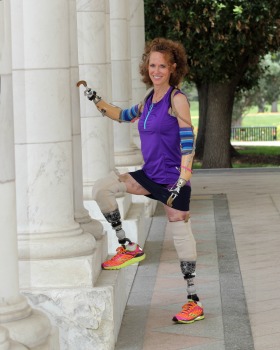 Christine’s team of medical providers was vast, with orthopedic surgeon Dr. David Hahn and plastic surgeon Dr. David Schnur leading her surgical care. After many discussions with Christine’s husband and parents, Drs. Hahn and Schnur moved forward with the risky surgery. As her family knew she would, Christine not only survived the amputations, but thrived.  After 3 months in Intensive Care, and another 6  months in rehabilitation, Christine went home in August of 2014.

With the aid of her four prosthetic limbs, Christine has learned how to walk, drive and complete many of her daily activities independently. Though her determination to succeed is innate, she also finds great strength in her family’s unwavering support and sense of humor. Though this may be the first you see of Christine Lentz, we certainly doubt it will be the last!

Bubbles is a beautiful, 10-year-old, chestnut-colored Labrador Retriever/Boxer Mix who was diagnosed with osteosarcoma in 2014. After the diagnosis, Bubbles began chemotherapy and underwent an amputation of her back right leg. Though she was doing well, cancerous spots were found in Bubbles’ lungs a year after treatment. She is now enrolled in a clinical trial at CSU Flint Animal Cancer Center to help her live her best life possible. Bubbles continues to love going on car rides, spending time with her family and eating just about anything she can lay her paws on (with the exception of Hot Tamales – yuck!)